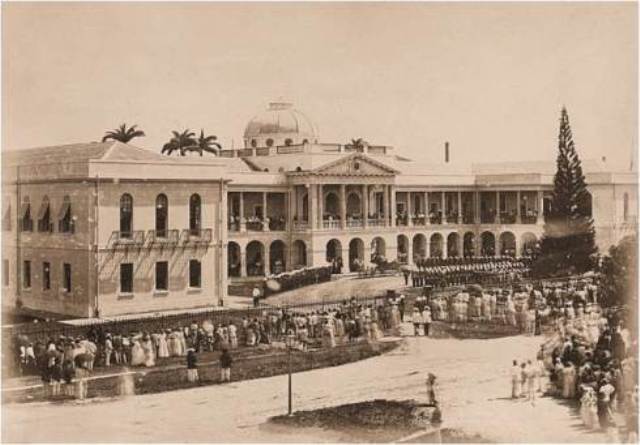 The First sitting of the National Assembly of the First Parliament of Guyana Parliament was held on the 26th May, 1966.

From the years 1831 to 1928 the Law Making Body of British Guiana was the Court of Policy. which consisted the Governor, seven official members and eight elected members.

In 1928 a new Constitution was introduced and British Guiana became a British Crown Colony. A Legislative Council was established and replaced the Dutch created Court of Policy.

In 1953 a new Constitution was promulgated and a bicameral legislature, consisting of a State Council and a House of Assembly was introduced. The State Council consisted of nine members. The House of Assembly consisted of a Speaker, three ex officio Members and twenty four Elected Members. The Speaker was appointed by the governor. A new and separate Department, which was called the Office of the Legislature, was established with a Clerk of the Legislature as its head, to serve the new bicameral Legislature. Also in 1953 also a Ministerial system of Government and universal adult suffrage were introduced.

This was short-lived as in October, 1953 the British suspended the Constitution and an Interim Government was established by the British Guiana (Constitutional) (Temporary Provisions) Order in Council, 1953. A Legislative council consisting of a Speaker, three ex officio Members and not more than twenty four Nominated Members was created by this Order on the 22nd December, 1953. The Speaker, who was not an ex officio member or Nominated member of the Legislative Council, was appointed by the Governor.

Establishment: The Parliament of Guyana is established by the Constitution of Guyana.

Composition: In accordance with article 51 of the Constitution. The Parliament consists

Powers: By article 65 of the Constitution, the Parliament of Guyana is empowered to make laws for the peace, order and good government of Guyana.

Life:  The life of the Parliament of Guyana is five (5) years.

Summoning: The President, by Proclamation, appoints the place where a session of Parliament shall be held and the time at which such session shall begin.

Prorogation: The President is empowered to prorogue Parliament at any time, by Proclamation. A prorogation does not end the life of a Parliament. It terminates a session of Parliament and brings to a close all proceedings pending at the time.

Dissolution: The President has the power, by Proclamation, to dissolve Parliament at any time. When Parliament is dissolved, its life and all outstanding business come to an end and persons who were Members of the National Assembly

Establishment: The National Assembly of the Parliament of Guyana is established by the Constitution of Guyana.

There may also have non-elected Members of Parliament.

Functions: The functions of the National Assembly can be grouped under three main headings as follows:

In ancient times, a Mace was a weapon of defence. A Mace is now a ceremonial symbol of authority and is used in Commonwealth Parliaments. In Guyana, a Mace was used for the first time on 10th Septem¬ber, 1957. It was made of silver gilt.

When Guyana became a Republic on 23rd February, 1970, the head of the Mace, which depicted British Royal Arms, was replaced with Guyana's Coat of Arms. The head of the present mace was designed by the Ministry of Information and Culture. The original stem, which is one hundred and forty-five and a half centimeters in length, depicts a Victoria Regia Lily, one of the largest water lilies in the world, first discovered in British Guiana during the reign of Queen Victoria. The stem also includes representation of a rice plant in full bearing and a sugar cane in blossom, representing two of Guyana's principal products.

On entering and leaving the Parliament Chamber, the Speaker is pre¬ceded by the Sergeant-at-Arms bearing the Mace on his right shoulder. When the National Assembly is in session, the Mace is placed on the Clerk's table, with its head pointing towards the Government side of the Chamber. When the Assembly meets as a Committee of the Whole Assembly, the Mace is placed below the Clerk's table.

When the Mace lies upon the table, the House is in session;

When under, it is a Committee;

When out of the House, no business can be done;

When from the Table and upon the Sergeant's shoulder, the Speaker alone manages.