All Moneys Must Go Into the Consolidated Fund

Mr. Sharma: I have listened to the Hon. Minister making his point in his rebuttal to the Hon. Member Carl Greenidge and what I have noticed was that, for convenience purpose, they are chosen sections of the Constitution and the law for convenience and not dealing with the matter. Let me quote from the Constitution, article 216, and it states:
“All revenue or other moneys raised or received by Guyana…”
There is an open bracket and closed bracket, but I am going to skip that part.
“…shall be paid and into and form one Consolidated Fund”.
But in the bracket, this is what it states further.
“(Not being revenues or other money are payable, by or under an Act of Parliament, into some other fund established for any specific purpose or that may, by or under such an Act,…”
This is the next important point.
“…be retained by the authority that receive them for the purpose of defraying the expenses of that authority)”
Basically what article 216 in the Constitution of the Republic of Guyana is stating is that all moneys must go into the Consolidated Fund, but there are exceptions  in which the Hon. Member did point out, and I agree, but he failed to relate them  to article 217 (3) of the said Constitution which states that:
“No moneys shall be withdrawn from any public fund …”
Those are the key words: “from any public funds”.
“…other than the Consolidated Fund unless the issue of those moneys has been authorised by or under an Act of Parliament.”
That is what we are trying to do here. This is the Parliament and we are saying that the manner in which the funds are being dealt with is not how we want them to be done. The Constitution is telling us this, and it further states in article 217 (4):
“Parliament may prescribe the manner in which the withdrawals may be made from the Consolidated Fund or any other public fund”.
I do not know if the Minister is listening to what the Constitution is saying, but this is what it said. It gives us the room to manoeuvre to what the motion is speaking about. It gives the House to deal with these matters.
Now I want to refer to what the Fiscal Management and Accountability Act, Act No. 20 of 2003.  Again, I agree with the Minister. When he quoted from the Consolidated Fund, in section 38 of the Act, he did state correctly that:
“All public moneys raised or received by the Government shall be credited fully and promptly to the Consolidated Fund,…”
Again the word “except” is used. He is correct again.
“…except –…”
There are sub paragraphs (a) (b) and (c) and I will not go through the details.  Here is where he is contradicting himself where it relates to section 39, subsection (4) of the Act which states:
“Subject to any other law, resources of Extra – budgetary Fund…”
This is important.
“…may be administered either through its own account in selected banks pre - approved by the Minister…”
This is so important.
“…or through the payment and banking services of the Consolidated Fund,…”
It means that we dictate where the money is placed and we say whether it should go over to the Consolidated Fund. It further states that if we should use the Consolidated Fund –
“…but shall be accounted for separate and apart from other resources”.
It is not depriving us from putting the Extra – budgetary Fund into the Consolidated Fund. It states that we have a choice. We either can go to a bank account that the Minister will establish for that purpose or we put it into the Consolidated Fund, but when we are going to account for it will do it separately. That is what we are saying here and the motion is correct. That is what this House wants by this motion…
Mr. Speaker: Mr. Sharma, if I could just.., for my own clarification, you are saying that the National Assembly is now requesting that the moneys go into the Consolidated Fund.  Are you saying, before today it was okay for the moneys to be where they are but after today, once National Assembly decides, they must go?
Mr. Sharma: I am saying yes because there is provision.
Mr. Speaker: There was no irregularity or illegality being committed prior to …
Mr. Sharma: It is correct, because they were acting within the confines of the Constitution, looking at a specific section, but if you look further, Mr. Speaker, you would see that no law   will have to be amended to facilitate the motion, and that is what is important here.                [Ms. Shadick: Follow the law.]      They are following the law, but the motion is basically saying that there is rule.  It is clear in the Constitution, as it is clear in the Act. It is clear there. This motion is being sought to have the Minister of Finance to comply with the respective section of the Financial Management and Accountability (FMA) Act 2003 as regards to the Extra-budgetary Fund and to have him enforce the law against the official vested with the responsibility for financial management of the Extra-budgetary Fund. Basically that is what this motion is asking for. Both the laws and the Constitution are supporting the motion, and so I would like the Hon. Minister to look at it and if he wants to respond I would be happy.
Thank you Mr. Speaker. [Applause]

Designation : Minister within the Ministry of Finance 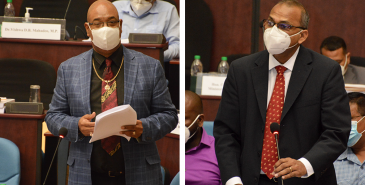 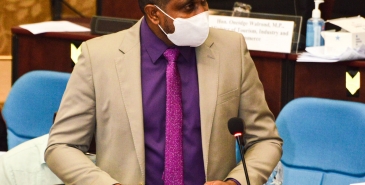 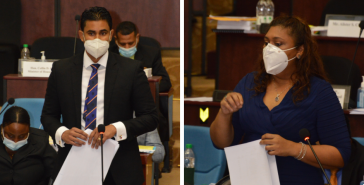 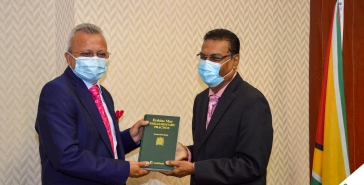