Diplomatic Relations between Cuba and Guyana

Minister of Public Service [Dr. Westford]: Thank you Mdm. Deputy Speaker. I rise to join my colleagues in the commemoration of this 40th Anniversary of our diplomatic relations between Cuba and Guyana. I promise to be brief and to the point.
The fact that these relations came into being on December 8th 1972 is of great significance to us as Guyanese because it reminds us of our then Head of State’s resilience in the face of treats of isolation by no lesser a country than that of the all powerful United States of America (USA). It reminds us that, as a sovereign nation, we must not allow interference in our internal affairs by foreign forces.
As is well known, Guyana enjoys diplomatic relations with scores of other countries, but our relations with this small Spanish speaking West Indian Island is unique. This intricate island that I am referring to is none other than Cuba. Cuba’s intricacies are as a result of its history. We have heard so much about it from the two speakers before me, a troubled saga of external interference and internal strife. Yes, I repeat, external interference and internal strife that has bread episodes of genocide, slavery, invasion, counter-invasion and a popular revolution. For over half a century, Cuba has intrigued the world with its unique brand of politics dominated by its infamous Head of State El Comandante Fidel Castro who only has to cough for the media to go on red alert.
As a result of not pandering and bending to external pressures, an economic embargo, the longest ever to be enforced, was sanctioned against Cuba by the President of the United States of America in 1962. This embargo has been and still is one of the most controversial actions of the United States of America.
Despite this economic and commercial embargo Cuba continues to provide assistance in the form of scholarship and other technical assistance to hundreds of countries. For us here in Guyana we have, over the last 40 years, received hundreds of scholarships in the fields of medical sciences, agricultural sciences, engineering, sports, politics, natural sciences and environmental sciences.
We have also enjoyed the sterling services of thousands of Cuban specialists who selflessly provided care to our nation. The training which our people received from the Cuban Republic has changed our human resource landscape and exerted a positive impact on our social services. The care and attention meted out to our many Guyanese citizens who were resident in Cuba throughout their training periods can only be deemed as one that is immeasurable. We cannot say thank you enough to that nation for what they have meted out to us.
This diplomatic relationship which we cherish was not all smooth going. There were several attempts to destabilise that relationship, some subtle, others more profound. Most notable was the bombing of the Cabana flight 455 on October the 6th 1976 off the coast of Barbados which caused the death of eleven of our scholars who were bounded to start courses of high education. It must be noted that the self-confessed perpetrators of this heinous crime are still walking freely in the United States of America.
It is a miracle in itself that Cuba has survived and can still give so much to other countries, enthral travellers from around the globe with its beaches, bays, mountains, music and impossible verdant landscape is an even greater achievement. The key lies in the Cubans themselves, survivors and improvisers, poets and dreamers, cynics and sages, defying all logic, it is the people led by that great leader El Comandante Fidel Castro who has kept the country alive as US eternal pressures mounted. It is they also who have ensured that Cuba continues to be the fascinating, perplexing, paradoxical nation it is. Such uniqueness is a vanishing commodity in an increasingly global world.
El Comandante Fidel Castro is a hero and is regarded to be such by everyone who believes in independence and human dignity. Perhaps if El Comandante Fidel Castro had been a friend of the capitalist block, he would have been given many hundreds, if not thousands, of Nobel Awards. The fact is that none have been given and none will ever be given, but he is our hero; he is our Nobel awardee.
Lots have been said by the speakers before me and lots will be said by others after me and we will hear more in depth as we go to the health sector and the sports sector. Before I end, let me say that the US blockade that we have heard so much of, and that so much has been said and written about, is a frosty cold war carryover. Maybe it served its purpose forty-plus years ago during the cold war period when the US tried to show its power against communism. I would like to join with the thousands and millions of person around the globe who are calling for an end to this unjust practice. It is in my view, a contradiction, since the very the United States, are having relationships and are dealing with other communist countries such as Russia, Vietnam and China.
Once again, I would like to say a great big thank you to the people and the Government of Cuba and more so to El Comandante Fidel Castro, without whom, none of this would have been a reality. As we say in Cuba Patria o Muerte which means patriotism or death. I hope that we will all continue to be thankful and to support the Cuban revolution in all their quests for gaining recognition worldwide. Thank you. [Applause] 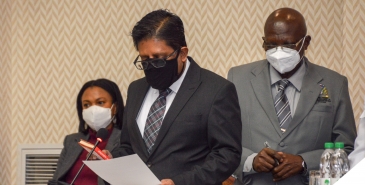